Here's a new riddle that hopefully won't be so easy, but I may be proven wrong.

You need to send an important object to a friend in Russia in a locked box but you cannot send the key separately or along with the package or else the KGB (Russian secret police) will confiscate it. How do you do it?

NOTE: The correct answer has been guessed. To read it, see the Comments section.

You're never too old to be a fangirl 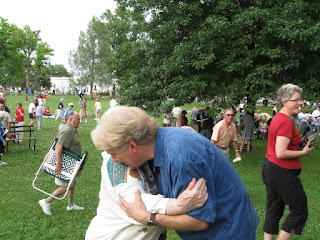 My mother (age 87) is a fan of Malley Keelan, a local Irish tenor. She loves watching the show he hosts on TV every Saturday night, and she loves listening to him sing. She even looked up information about him on the internet and found out all about his family. She printed out one of the songs he sings, so she could play it on the piano.

So when I heard he was going to be the featured soloist at an outdoor band concert, I asked if she wanted to go. "Oh, yes," she replied. We sat in the front row and enjoyed the concert. Afterwards my mother approached the stage with her walker. I strode on ahead and called out: "Malley, can you come meet my mother? She's a big fan of yours." (I remembered Malley from visits to his record store years ago, though I doubt he remembered me.) 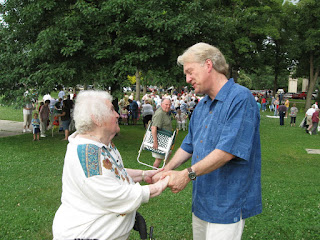 He was a very gracious "star." He came over and gave her a big hug, then stood for a while and talked with her. I snapped the pictures, and then sent them to my brother, who added them to the photos in her Ceiva (digital picture frame). Imagine her surprise when the photos of her with Malley appeared the next day. She didn't even know I had taken them.

A husband and wife are traveling on a deserted road when they run out of gas. The husband leaves the wife in the car to go get gas. He makes sure the doors are locked and the windows are closed before he leaves. But when he returns, there is a stranger in the car with his wife. His wife did not unlock the doors or open the windows while he was gone. Who is the stranger and how did he get there?

Well, it had to happen sometime. Our family (plus a couple of friends) made a movie. We call our production company "Celtic Mouthwash" and we have our first debut on YouTube. It's a "horror" movie filmed -- where else -- in a cornfield. To see "Cornelius and the Ethical Vegetarian," click on this link:

Oh, and make sure to watch the bloopers at the end. And be sure to take note of my classic line that has to do with a chicken pot pie, a line that one reviewer called a "cinematic classic" on par with, "Of all the gin joints in all the towns in the world, she walks into mine."
Posted by Marcia C at 9:08 PM No comments: