How to Play the Party Game "Mennonite Manners"

This crazy game is fun for all ages and is sure to be a hit at your next party.
Like many folk games passed from friend to friend, Mennonite Manners goes by different names. Some call it “Mennonite Madness,” or even “Midnight Madness” (probably because of confusion about the original name). Whatever you call it, this party game will keep you laughing, moving and shouting. Be careful that you don’t disturb the neighbors when you play this game!
Any number can play, but the game works best for 4-12 players. It’s really quite simple. All you need is an 8 ½ by 11-inch 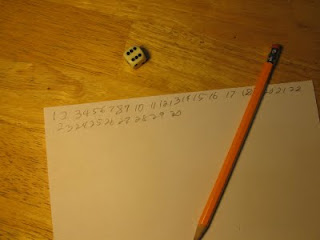 sheet of paper for each player, one pencil and one die (that’s singular for dice). Sit or stand around a table and place the pencil in the middle of the table. Clear the space, because it’s going to get crazy.
Everyone takes turns rolling the die. When someone rolls a 6—let’s say it’s John—he grabs the pencil and begins writing numbers from 1 to 100 on his sheet of paper. At the same time, everyone else continues to roll the die as fast as they can, because now the pressure is on.
If Sarah rolls a 6 next, she grabs the pencil from John and begins writing numbers from 1 to 100 on her sheet of paper. But watch out! She may only write one or two numbers before someone else rolls a 6 and grabs the pencil from her. Everyone (except the person with the pencil) keeps trying to roll a 6 and grab the pencil. When John finally gets the pencil back, he picks up writing numbers where he left off, trying desperately to be the first one to get to 100.
By now it’s turning into a frenzy, as fingers are flying and stress builds. John is tempted to just scrawl his letters, but that won’t work. Numbers must be legible for a winner to be declared.
One wonders why this game is called “Mennonite Manners,” since there is nothing mannerly about it, and many Mennonites don’t play games with dice. Perhaps “Midnight Madness” is a better name, because it’s a great game to play late at night, and it often resembles madness, especially when the shouting begins.
But the competition is all in good fun, and though you may feel like enemies while playing, evenings around a game table are the stuff of lifetime memories.
Posted by Marcia C at 8:16 PM