Controlled Burns on Grassland and Prairie 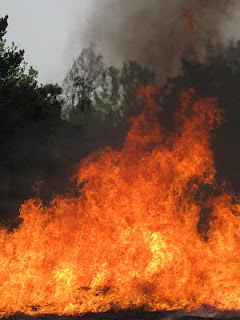 This year I got to watch two controlled burns: one as a participant and one as an observer. The Plains Indians burned the prairie regularly. The black absorbed the sun, which made the grass grow faster, attracting bison.

Controlled burns (at least in Nebraska) are typically performed in grassy areas to reduce the thatch and/or get rid of unwanted weed trees. The soil and underlying seeds and roots aren’t affected. In fact, the ash covers over the seeds, making a better bed for the new growth.
The first burn I participated in was at an acreage west of town. The owners (friends of mine) wanted to rid their fields of the little Eastern red cedar trees (common weed trees in our area). The second burn happened at the University of Nebraska East Campus, where a one-acre plot has been left to its natural state, allowing a mini tall-grass prairie of native plants to spring up. (Quite a wonderful place in the middle of the city.) Every spring the range management class participates in the burn as part of their studies, and occasionally we come and watch the process. The photos are from this bur 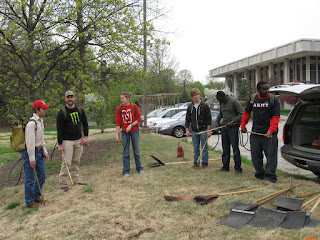 n.
The tools for a controlled burn include a drip torch to start the fire, fire swatters and/or fire brooms, coupled with water hoses, to control the fire. When I helped, we used a hose attached to a large water tank. The tank was mounted to the back of a pick-up, which slowly encircled the field, as I followed behind and sprayed the perimeter with water. (I also got to take a short stint at operating the torch – fun for a pyromaniac.) The east campus burn was easier to control, because the tall grass differed from the vegetation that surrounded it, so students carried backpack water pumps to use if the fire got out of hand. 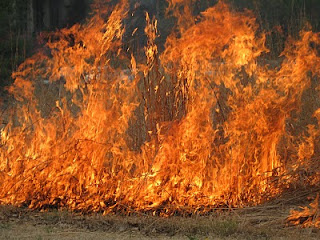 Controlled burns require a permit, and the local fire department must be notified. In our area, regulations state that all burns must be completed by May 1st. A burn should not be attempted on a windy day.
Fields burn quickly, and it’s amazing to watch, especially a tall-grass prairie, where the flames leap high and the air around becomes very hot. Little mammals scamper away in fright. On east campus, the professor directing the burn made sure to leave escape routes for the mammals.
After a burn, the field seems silent, almost eerie, with smoke rising from the blackened field. But soon enough the green grasses sprout up, and the field becomes healthier than it was before the burn. 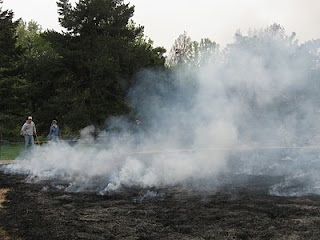 Just two weeks after the burn: 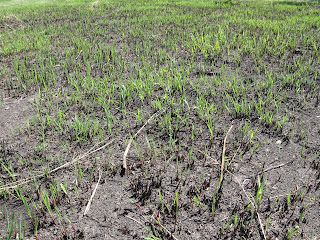