The Sea of Red 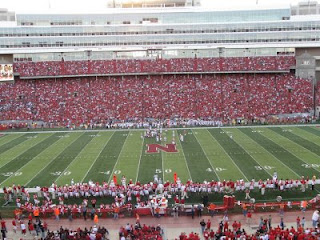 No, not the Red Sea -- the Sea of Red. Everyone who lives in Nebraska knows what that is: the phenomenon of football fans and "Big Red Fever." I got to experience that last Saturday at the Nebraska-New Mexico State game. I hadn't been to a game since my college days, and it was fun to be a part of the action again. 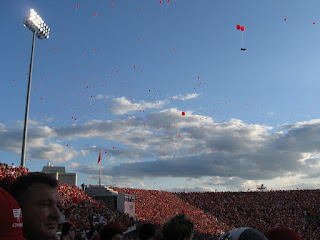 After the first score, the fans let go hundreds of red balloons. It's really amazing to watch. 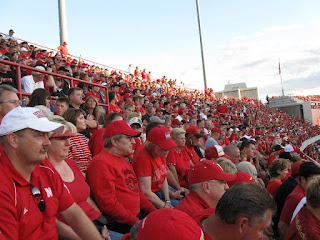 Nebraska fans are some of the most devoted fans in the country. I'm convinced that the noise we made was a factor in our defense. It was fun to be a part of that.

At the same time, Nebraska fans are known for their hospitality towards opposing fans. While on vacation a man from Oklahoma noticed my Nebraska hat and told me about the time he had attended a Nebraska game and had to use the restroom. He approached the long line of red-clad fans with apprehension. But someone noticed the colors he was wearing and shouted, "Here's an Oklahoma fan!."

"It was like the parting of the Red Sea," the Oklahoma fan said. "I've never seen anything like it." 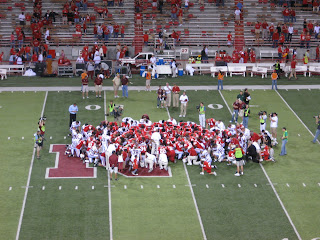 Our new coach, Bo Pelini, has brought back much of the energy and excitement and Nebraska values. He also brought back Coach Ron Brown, who reinstituted the post-game prayer circle. He invites any interested football players, including those from the opposing team, to join him. As you can see, many of them knelt down as Coach Brown led in prayer.


For more Nebraska spirit, check out my videos of the band:
http://www.youtube.com/watch?v=PrC7BFL8pm8