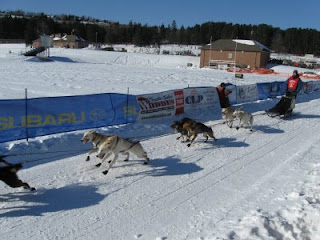 We could hear the dogs barking from blocks away. They knew what was to come, and they were eager to get started. It was fun to watch them tug at their lines, wanting to GO!!

If you've never seen a dogsled race, there's no way to describe it. The sights, the sounds, the chill in the air, the excitement. It's amazing to imagine what the team is about to do.

The first racers were the mid-distance mushers, with eight-dog 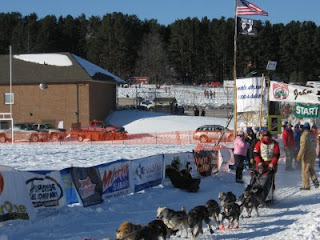 teams. Here are some videos I took of the mid-distance racers:

After the mid-distance came the marathoners, with their 14-dog teams. An amazing amount of power in those dogs. Above is Jason Barron's team. (Jason won the race.) 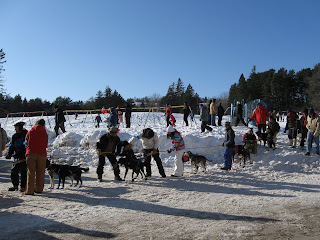 It took at least a dozen people to hold the dogs back. Here's a picture of the team moving to the start line. Here's a video of the same thing: http://www.youtube.com/watch?v=5m-FjiUFIKo

After watching most of the start, we headed north of Duluth to a spot where the dog teams crossed the road. Pete had invited us to come join his family, friends, and the race officials.

It was a great way to experience the race: 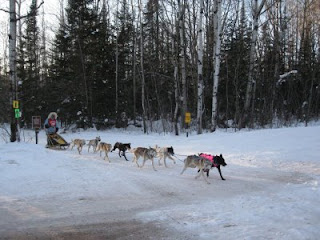 shivering in the birch forest, waiting for a team to emerge from around the bend, almost silent, except for an occasional "ching ching ching" from the gangline and the musher's "on by" to keep the dogs from stopping to taste our chili. We stood close enough to talk to the 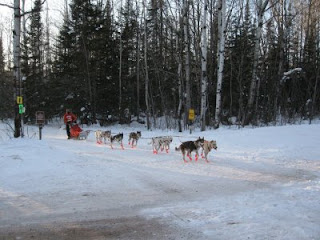 mushers as they sped by. Some would ask how close they were to the next checkpoint or comment on how good our food smelled or thank us for our support. We'd call out encouraging words, knowing that for some of them it was their first race. It was great to be away from the crowds and the hype, seeing what it really was like for the racers.

Here is a video clip of the teams at the road crossing:

Click here to go to the main blog page.