The Sociology of Earbuds 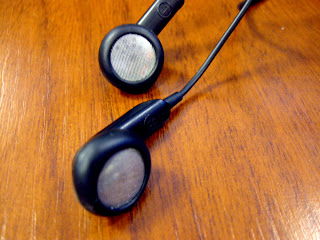 Earbuds (and the iPods/mp3 players attached to them) have changed the world. I admit, I’m guilty myself. While walking my dog or commuting on the bus, I get bored. I’m not much for music in my ear. (I prefer to listen to music in the air, not through earbuds.) But I love podcasts.  For me it’s mostly recordings from AncientFaith Radio and occasionally Mushing Magazine.  (Yeah, I’m a bit odd.)

Here we are, crammed in a bus, but no one communicates. I sit next to someone, so close that we have to tense up to keep from touching, but yet neither one acknowledges the other; we both are in the world of our recordings.  It’s just not right.

So sometimes I rebel. I’ve made friends with the morning bus driver. We’re usually the only ones talking on the bus. I’m not sure what the others think of our chattering.  But the driver tells me she looks forward to picking me up each day.

But I still plug in on my evening commute. A couple of days ago I sat down and plugged in as usual. A young woman sat close to me. I smiled at her. I recognized her from somewhere.  But I was already plugged in, so I didn’t say anything.  Then the bus stopped and waited while a young girl gathered her musical instrument and backpack and got off the bus. We watched her, our eyes showing our concern for the young girl riding the bus alone.

When she had gotten off, I paused my podcast, looked at the young woman and said, “She seems kind of young to riding the bus by herself.”

That comment started a conversation.  I asked the young woman where I knew her from, and she said it was just from the bus. (I still think I know her from somewhere else, perhaps the Table, where I eat lunch frequently, but she could be right.) We exchanged names, I asked her what she was studying, she asked about my job, where I lived, what I was listening to. I made a new friend on the bus, and I look forward to seeing her again.

What a concept: Making a new friend on the bus. It used to happen all the time; but now it’s an oddity.  And it makes me concerned for the future of our society.
Maybe I’ll unplug more often.
Posted by Marcia C at 9:17 PM