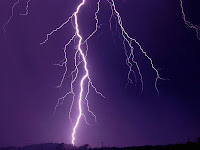 This one should be obvious, but I've seen it misused so many times lately, that I decided to include it in my Grammar Tips.

Here’s how to tell the difference between these two words:


Some examples are in order:

The instances where you would use the word “lightening” are really very rare.  When in doubt, use lightning.
Posted by Marcia C at 10:43 PM