Can you trust your memory? Lessons from the Protecting Hand Sculpture 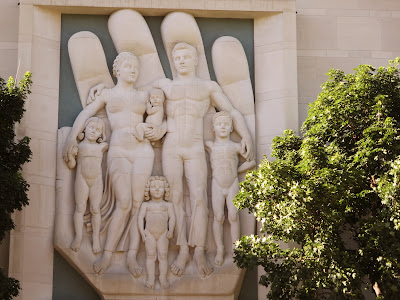 In Lincoln, Nebraska, where I live, there is a sculpture called “The Protecting Hand,” originally created for what was then Woodmen Accident and Life (Now Assurity Life Insurance). It still graces the south side of a downtown building, clearly visible from the state capitol, that unique tower on the plains.

I remember when I was a child, the parents were nude.

But are those memories accurate?

A photo of the sculpture was recently posted on a Facebook page about Lincoln, and people began commenting on the fact that the figures were formerly nude and the clothes were added later.

Then someone had the audacity to state that the figures had always been clothed. That can't be true, I thought.  They were once naked.  Everyone knows that.  It’s part of Lincoln’s lore.

Still unbelieving, I searched for visual proof, and found this photo from the 1957 University of Nebraska yearbook: 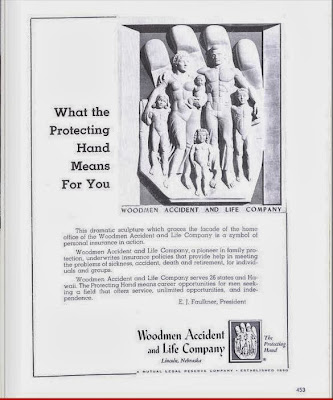 Yet there is this collective memory of the figures being naked.  I showed the picture to my 20-year-old daughter, and she said, “Weren’t they naked at one time?”

The Facebook page shows the common consensus: The parents formerly had no clothes. Here are some comments:
When someone explained that it was an urban myth that they were naked, people refused to believe it:

And when someone finally showed pictures to prove it, including one of the sculpture going up, that clearly shows pants:

And then, after we had proved that the figures had always been clothed, someone added their comments (evidently without looking at the previous comments):

Like many legends, there is an element of truth to it.  The artist’s original model showed all the figures entirely nude, but he was asked to modify it before creating the full-sized version on the building.  That model is now on display in the Assurity building, which is now in a different location.

Why do so many people remember the figures being nude?  And why is it such a strong memory? Did it just seem like they were nude because the clothes were so understated?  Did we focus on the children and miss the clothes on the parents? Were we somehow remembering hearing about the artist’s original model and getting it mixed up with the full-sized sculpture?  Did we get some false information somewhere?

The fascinating thing about this memory is that it is not just something we heard or experienced.  It’s a strong visual memory.  Many people can “see” those naked people in their memories.  How could those memories be wrong?

I still find it hard to believe that they have always been clothed.  And what about my second grade teacher?  Was she just talking about the kids being naked?

I’ll never know.  But what I do know is that we can’t trust our memories all the time.  And certainly not when it comes to naked people in a huge hand.