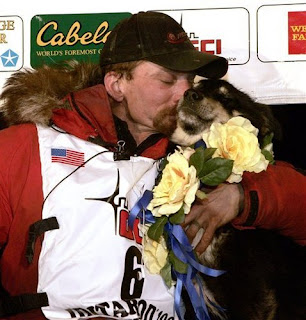 Iditarod 36 has now finished, and it's time for normal life to resume. No more checking the race stats every few minutes. No more video updates from the trail. No more discussions with my on-line Iditabuddies and even a few local friends who follow the race.

For the second year in a row, Lance Mackey has done what people said could not be done: win both the Yukon Quest and the Iditarod in the same year. His "double-double" will be talked about for years to come in mushing circles.


As I reflect on the race, here are a few other moments to remember: 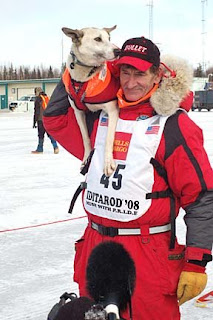 At the last minute, Joe Runyan came out of mushing retirement to serve as a guide for blind musher Rachael Scdoris, after Tim Osmar, her original guide, had to cancel because of a broken leg.

G. B. Jones (shown at the right) announced his retirement effective immediately following the ceremonial start. He was possibly the only musher to scratch after only running for only 8 miles.

The experiment of GPS tracking took a comical turn when Martin Buser gave his unit to a pilot. The on-line forum was filled with frantic messages from fans who wondered why Martin was traveling erratically at an incredible speed.


To everyone's surprise, Dee Dee Jonrowe was the first to the checkpoint of Cripple and winner of the Halfway Award. The checkers were surprised to see her come out of the darkness, and Dee Dee herself was suprised. When they told her, "You're the first one here," she answered, "No. No." The prize--$3,000 in gold nuggets--came in handy. It was her husband's birthday and she hadn't gotten him a present yet.

Who could forget what happened at Elim: Lance Mackey arrived just a few minutes ahead of four-time winner Jeff King. Lance parked his dogs, hung up his coveralls and lay down, pretending to sleep. When Jeff arrived, he thought he'd take a nap too. As soon as Lance heard Jeff snoring, he sneaked away, giving him the edge he needed to win the race. 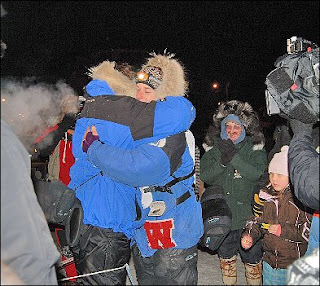 One of the most memorable finishes this year was Rohn Buser, 18-year-old son of four-time winner Martin Buser. This was Rohn's one and only race, but it was definitely one to remember for his father, who raced his 25th Iditarod this year. Here he is, greeting his son at the finish line. 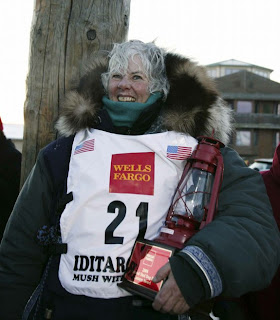 Last, but most certainly not least, we will remember Deborah Bicknell, who was the last musher to finish this year, earning her the coveted "Red Lantern" award.

Last year she had to scratch when she got lost in a blizzard, fell in a river and had to camp overnight while search parties looked for her. This year, the 62-year-old grandma with an artificial knee kept going. The final run took longer than expected. The on-line forum was flooded with messages from worried fans watching the on-line Nome cam for signs of the last musher. Someone even called the bar next to the finish line to see if she had come in yet. At last, the people began to gather. A huge crowd welcomed the last musher to Nome.