Who is Trail Breaker?

Usually the funniest moments come by accident. This year the most hilarious thread on one of the Iditarod forums was started by a question posted by an unknown fan. This person started a thread called "Who's Trail Breaker?" and asked a simple question: "When I wach the GPS updates, I see that a musher called Trail Breaker is in a clear lead. Who's that guy and why isn't anybody interested in him?"

Since this particular fan never posted again, we have no idea if this person was joking or for real. The question was answered in the next post: Trail Breaker is not a musher, but a snow mobile breaking the trail. It would have ended there, but then the jokes started coming:

"Yeah! But he seems to be going the wrong way sometimes, he must be a rookie... "

"I wish I had gone with my first instinct and picked Trail Breaker in my top 10."

"Any word on whether or not this guy has taken his 24 yet? Either way they are tearing it up this year. I think I read somewhere on the internet about a top secret, hush hush breeding program at this kennel. I will have to look for the link...."

"Trail Baker has stoped in Nulato. My guess is that his taking his 24 there."

From there came talk of his various adventures and his twin sons, Heart and Ice. It turns out there is a British connection: Sir Kit Breaker (say it really fast and you'll get it.). Other relatives started to surface: Wind, Deal, Code, back, Tie, Myth, and the bad guy, Jaw Breaker. 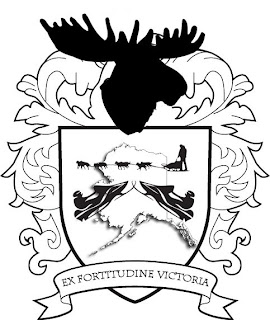 A prolific poster named "tanglefoot" uploaded a picture of the family home in the Hamptons, owned by "Ground Breaker," and the Breaker family crest, shown at the left. He also drew a family tree, which he summarized here:

it all started with ankle breaker marrying tooth sayer...
they gave birth to nail breaker, she had 2 boys with ? they were tie and meatball, tie has no kids
meatball has 2 kids boys, bone and rule
bone married ? and gave birth to jaw, rock and neck they have no kids yet.
rule married ? and gave birth to two boys, code and kit.
kit, who married the lovely lady gail a princess, and became sir kit and lady gail breaker, they had kids then split after kit left with his first mistress that became his second wife home (nee spliter)
sir kit also had a second mistress we believe to be called egg.egg has no kids with kit that we know of.
home and sir kit then had tie and bubble,
tie has 2 kids boy and girl ball and wave and shis sister bubble has 2 boy and girl called brick and myth.
before this
sir kit and lady gail had a son, breaker breaker.now..you following?
back to the two boys, code and kit....
code had 5 kids with syntax ( nee error)
they have 5 kids the twins, ground and our man TRAIL, john, sled and leg,
leg is married to face (nee plant) who have 2 kids, boys nose and teeth.
TRAIL BREAKER got married to 'promise' who is the missing shepherdess from NZ and they had two boys hart and ice.
ground trails twin brother married ? and lives in the mansion and gave birth two kids boy and girlrecord and wind,
wind married storm (nee acomin)and they have 2 kids circuit and deal..
and there you have it

My contribution to the forum of course was a poem, written after Trail's apparent win:

In the land of the midnight sun
Where strange things have been done
We heard everything
About Mackey and King
But nothing of true number one.
"Who is this guy, anyway?
"The fans were heard to say.
"All through the race,
He's been in first place.
The others are miles away."
Then on the 12th day of March,
His two sons Ice and Heart
Both watched him come in
And cheered his win
It was Trail Breaker under the arch!

And tanglefoot explained it all with a media advisory:

Those with a keen eye at the finish line in the early hours of this morning might have seen just before Lance Mackey arrived to claim his 2nd back to back iditarod and back to back idita-quest victory (commonly now known as the double double), two snow machines driven by hart and ice breaker, pass side by side under the burled arch! towing bins full of trail markers (moose snacks). the two intrepid snow machines have been blazing a trail to Nome to save a stricken family from falling into poverty. These plucky teenage trail makers have been responsible not only for guiding the mushers of the iditarod to Nome, but also have been involved in a sometime epic battle to try and recover a lost Alaskan gold tiara from falling into the hands of the United States Treasury Dept.

The IRS orginally staked a claim to the item after an old gold claim was taken in lieu of taxes by a bankrupt gold dredging family several years ago. The tiara was believed to have been made from gold originating from the claim and was in fact the only gold extracted from it.

The IRS last night lost a court injunction to lay claim to the piece by a federal court and the two boys from the Breaker family were on hand to receive the piece of jewelry after it was recovered from a cabin hidden away up a long forgotten slough, just off Patsy Slough off the Yukon near the town of Koyuk.

It is believed a family member by the name of Code, had hidden the tiara there to keep it safe many years ago and passed a message to the boys before his death last week at the age of 104. The family plan to have the tiara declared rightfully theirs by a high court next week, and seek damages of nearly $1.5m. from the treasuary. The boys say they were helped by a another family member whos name is being kept a secret.

OK Iditabuddies . . .
Now if you watched really closely to the live finish, you might have seen ice on the right of your screen pass something to a person stood on the trail side...we can now inform you that it was in fact the missing tiara the missing breaker family heirloom...well folks... the mystery is over...Lance is a member of the breaker family and has succeded in grasping the tiara way back on the Yukon, then carefully stashing it in his sled, he's been transporting it at record speed to nome, to beat the IRS deadline and help save the family.

When he stopped on the beach outside nome, to thank his team, he slipped the tiara to ice,(it was a distraction technique) who raced ahead to the burled arch and passed it over to trail breaker, his dad, who in turn has now got the priceless heirloom made from the finest gold from the beaches of nome back in the family and thers is now a court case underway that they are destined to win!

dilli and i have had word that in fact the tiara is on its way to a secret location to be kept safe for future years...oh and Lance...he gets a share of the money and is not going to spend it on a new truck as planned...hes just won one for himself!

This is just a sampling from the forum, which at last count has 21 pages. To read the entire forum, see this link: