"Stopping by Old Woman Cabin on a Chilly Evening" 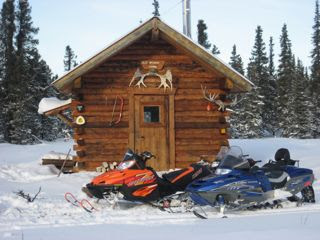 I'm excited. One of my poems has been posted at a remote cabin in northern Alaska, accessible only by dogsled, snowmobile (called "snow machine" in Alaska) or helicopter. It will probably be read by only about 100 people. So why am I so excited? Because those 100 people are some of the people I admire most -- the dogsledders ("mushers") in the Iditarod Trail Sled Dog Race. During last year's race I got inspired (as usual, late at night) and wrote a parody poem of Robert's Frost's "Stopping by Woods on a Snowy Evening." Called "Stopping by Old Woman Cabin on a Chilly Evening," the poem takes the point of view of a musher stopping to feed ("snack") his or her dogs in a cabin located halfway between the checkpoints Kaltag and Unalakleet, one of the longest stretches of the race. I posted it to an on-line forum on the Iditarod sponsored by Cabelas. This year, someone posted my poem again, to a new forum that the great folks from the Bering Strait School District set up when the Cabelas site shut down. One of the teachers saw the poem, printed it out and added an illustration, which was drawn during one of the first expeditions to map out what is now known as the Iditarod Trail. He then laminated it and posted it at Old Woman Cabin. As the mushers pass through--cold, tired, perhaps a bit discouraged--I hope they take a bit of cheer in reading my poem. Here it is:
Stopping by Old Woman Cabin on a Chilly Evening
(with apologies to Robert Frost)
Whose house this was, all mushers know.
She's gone to the hereafter, though.
She will not mind me stopping here.
To snack my dogs amid the snow.
My 14 dogs must think it queer
To stop without a checkpoint near.
Between the river and the trail,
The coldest evening yet this year.
They start to bark and wag their tails
When they see me get out the straw bales.
The only other sound's the sweep
Of the ever present wind that wails.
Alaska's lovely, wild and deep,
But I've got to get to Unalakleet.
I've miles to go before I sleep,
I've miles to go before I sleep.
Here's a picture of the poem that is posted in the cabin: 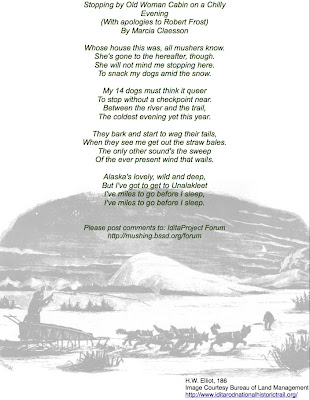